Liz Meredith, Repro LP (Spleencoffin, 2019)
“Meredith’s gestures are simple and seemingly impulsive. Recurring drones that whirr and cough. Harmonics snagged on the sharp edge of the looper return. Yet endurance renders them profound, just how even the most everyday objects accrue a quiet wisdom as their colours start to fade and mud smatters their surfaces.”
– Jack Chuter, ATTN Magazine

“Meredith is a true electroacoustic adventurer, utilizing viola, electronics, and tape loops to unfurl drones behind her as she progresses, as if she were alone on a slowly drifting boat and the sounds were the memories of her passing.”
– Ryan Masteller, Tiny Mix Tapes

“Four pieces, all dealing with loops, so I would think, and in each of
them this is worked out in quite a different way, and yet Meredith keeps it all close together by using a very minimal approach every time. That is the thread that runs through these pieces. This is all quite a surprise! It is a very great and consistent record. It begs the question: why act so obscure? This is a great record; something to be proud of.”
– Frans de Waard, Vital Weekly

John Somers & Liz Meredith, The Disposition of Vibrant Forms 5 LP’s (self-released, 2013)
“The Disposition of Vibrant Forms is an epic release in every sense of the word.  It’s also quite frequently breathtakingly gorgeous, a recording that rewards spending the time it takes to drink it in. […] Each piece is an example of extreme subtlety, music that works in different ways at low or intense volumes and becomes borderline hallucinogenic through headphones. What can initially sound like a snail’s plodding journey also carries these little dancing tones in clusters, and the ear begins to seek them out patiently. Such minute alterations, like a window’s lights coming on in Warhol’s Empire, occur over such elongated time periods that they accrue a dramatic impact. […] ‘Montebello Lake’ parts I and II suggest late-afternoon sunlight slowly drifting into dusk. Meredith’s viola lines trace long drones that capture that levitating twilight when the sun sets yet the sky remains bathed in light. Somers’ guitar textures get smeared into long shadows, and the piece concludes in a ringing tone of night’s arrival, that reminder that dark has imperceptibly swallowed the sky and it’s time to head home.”
– Bret McCabe, Baltimore City Paper

Liz Meredith, Liz Meredith LP (self-released, 2012)
“Liz Meredith released a self-titled LP featuring two luxuriant, sidelong immersions into subtly shifting moods. […] Liz Meredith is a gorgeous plunge into a plaintive mood, a place where rising and falling electronic textures and drawn-out viola lines cast soothing shadow plays on the brain. The glistening Side B clings to the ears the longest, the sound of a slow, cinematic fade-out that takes nearly 20 minutes to move from a tight close-up to a widescreen vista, every increment recalibrating the emotional kick of the image being branded on the mind’s eye.”
– Brett McCabe, Baltimore City Paper 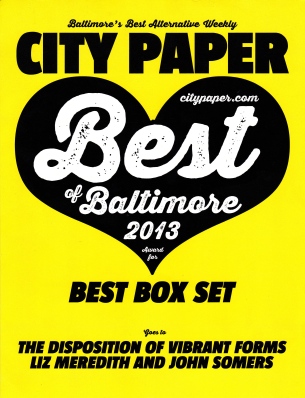